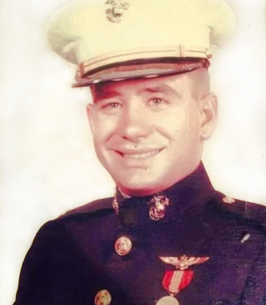 On February 6, 2022, Thomas V. Ashworth, loving husband, father, grandfather, friend, and Marine passed away at the age of 78. Tom was born on January 19, 1944, in Fort Smith, Arkansas to the late Doris and Cotton Ashworth. His early years were spent mostly in Paris, Arkansas, where he graduated from Paris High School in 1962. The friends and memories from Paris were dear to him and lasted his lifetime. Tom was especially fond of Mt. Magazine, where he often took his family on day or weekend outings to enjoy the beauty of God’s creation.

Tom then went on to and graduated from Arkansas Tech University. Directly after college, Tom enlisted in the Marine Corps, went through OCS, and became a CH-46 pilot. While stationed in California, Tom met the love of his life, Jane Wells, of Petoskey, Michigan. In 1969, Tom was deployed to Vietnam, where he engaged in over 460 combat and medivac missions. During leave in the middle of his tour, Tom met up with his love in Hawaii where they tied the knot.

After serving his enlistment with the Marine Corps, Tom earned a Master's degree in Political Science from the University of Arkansas. Tom and Jane went on to have three children and moved back to Fort Smith, Arkansas in 1978, where he lived out the remainder of his life.

Tom spent his life serving and helping others, living out the greatest commandment, to love your neighbor. He was particularly involved in the POW/MIA issue, working tirelessly to bring awareness of and fight for those who didn’t make it home. In this effort, Tom wrote articles, traveled the country for speaking engagements, and testified twice in front of U.S. Senate Committees with his vast knowledge and expertise. However, his greatest joy in life came through serving as a friend and mentor to many Hmong immigrants and families. The positive impact and fulfillment these treasured relationships had on his life would take a book to express.