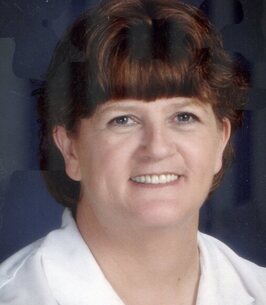 Jo Anne Riggs, 64, of Fort Smith, Arkansas passed away on Monday, September 5, 2022. She was born on December 12, 1957 in Fort Smith to Joe and Wilba (Yandell) Welling. She was a retired cafeteria manager for the Fort Smith Public Schools and was of the Baptist faith. Jo Anne was preceded in death by her husband, Jerry Lee Riggs, her parents and a sister, Lisa Leighton.
The family will visit with friends from 5-7pm, on Thursday, September 8, 2022 at Ocker-Putman Funeral Home in Fort Smith. A private burial will be held at a later date.
She is survived by her daughters, Melissa Anne Schoeppey (Michael) of Pocola, OK and Rachel Westpfahl (Travis) of Fort Smith; a sister, Norma Medley of Van Buren, AR, two brothers, Ron Welling of Gladewater, TX and Bill David Endicott of Fort Smith and five grandchildren, Andy Schoeppey of Fort Smith, Isaac and Trenton Schoeppey of Pocola and Caroline and Addilyn Westpfahl of Fort Smith.