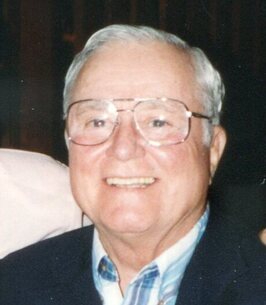 James Tunney Lenahan, 95, of Fort Smith, Arkansas died Sunday, June 12, 2022 in his home. Jim was born on September 23, 1926 in Memphis, Tennessee to William and Cecilia (Smith) Lenahan. He was a U.S. Army Veteran, a retired Regional Sales Manager of Union Pacific and a member of Christ the King Catholic Church. He was preceded in death by his wife JoAnn and his son James Lenahan, Jr.
Funeral Mass is 10:30AM, Friday, June 17, 2022 at Christ the King Catholic Church with private burial with honors to follow in the U.S. National Cemetery under the direction of Ocker-Putman Funeral Home of Fort Smith.
He is survived by his son, John Lenahan of Joplin, MO; a daughter, Jean Marie Chapman of Colorado Springs, CO: 5 grandchildren, Seth, Stephanie and Jeffrey Chapman and Bailey and Chase Lenahan and 3 great grandchildren.
Visitation is 4-6 PM Thursday at Ocker-Putman Funeral Home of Fort Smith.
In lieu of flowers memorials may be made to the American Diabetes Association, P.O.Box 2680, North Canton, OH 44720.