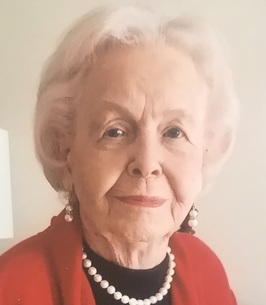 Gwendolyn Ludwick Hammersly of Fort Smith passed away peacefully on March 22, 2022 at a Tulsa, Okla. hospital, 10 days shy of her 99th birthday.

She enjoyed winning at duplicate bridge, dancing to Big Band music, reading hundreds of books (especially biographies) and creating a beautiful home and delicious meals. Her made-from-scratch spaghetti and meatballs and lattice-crust cherry pie were legend.

Although she delighted in fashionable clothes and furnishings, she often reminded Blackie that they had been happy starting married life in a tiny, two-bedroom house and could be happy in one again.

She was an active second-generation member of Central Presbyterian Church of Fort Smith. She cherished Sunday services and her church family, especially ladies’ circle meetings where she made lifelong friends.

As a teen, she worked as an usher at a downtown movie theater where, one Sunday, she learned the Japanese had attacked a place she’d never heard of – Pearl Harbor.

She then devoted herself to the World War II effort, working in offices at Fort Chaffee in Fort Smith and Lowry Field in Denver, Colo. She later referred to herself as a “Rosie the Riveter.”

Blackie was a former WWII bomber pilot, which did little to lessen Gwen’s lifelong fear of flying. They traveled together, Gwen mustering up her courage, in his single-engine Beech Bonanza to destinations as far as the Yucatan Peninsula. Later, they flew commercially to Rio de Janeiro, the Bahamas and London.

Early in their marriage, she worked happily at the state employment office and made many friends.

During her child-rearing years, she encouraged her daughters in school classes, tennis, Scouts, summer camp and church activities. The family often packed up a camper for weekends at Lake Tenkiller.

Much of Gwen’s life revolved around family. She visited, phoned, celebrated holidays and helped care for her parents, in-laws and an older sister for many years.

In her younger sister, June Ludwick Howard, Gwen had a best friend, shopping and travel buddy for life. They raised their children together and later traveled with their husbands coast-to-coast. A favorite destination was the Hammersly cabin in Branson.

She loved journeying to California to connect with her brother, David Ludwick, Jr., and his beloved family.

Even in her 90s, Gwen still met friends and enthusiastically pursued her perfect day: lunch out, followed by shopping and a Robert Redford movie that night.
Daughter Lisa and grandson Michael moved into the Fort Smith home during those years to help out Gwen and Blackie. Starting In early 2020, Gwen stayed at daughter Gail’s home in Tulsa, where she received loving care.

Gwen was preceded in death by her husband, her parents and her sister, Ladine Ludwick Wentz.
Her dearly loved survivors include: two daughters, Lisa Hammersly of Fort Smith and Maumelle, Gail Hammersly Maercklein and son-in-law Douglas Maercklein of Tulsa; her grandson, Michael Hugh Hammersly Munn of Maumelle; brother David Ludwick Jr. of Palm Desert, Calif.; sister June Ludwick Howard of San Antonio; nieces and nephews, caregivers and friends.
Funeral service will be 2 p.m. Friday, April 1, at Central Presbyterian Church in Fort Smith, followed by visitation at the church, under the direction of Ocker-Putman Funeral Home of Fort Smith. Private burial will be earlier at Fort Smith National Cemetery.