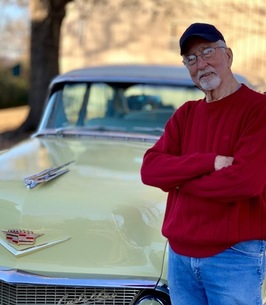 Billy “Don” Redding, 84, of Fort Smith went to be with his Lord and Savior on Friday, April 1, 2022 while in his home and surrounded by loved ones. He was born December 27, 1937 in Greasy Valley, AR to his parents, Mark Redding and Clarice (Rogers) Redding. He was a U.S. Air Force veteran of the Vietnam Era where he served in Germany and was trained as a dental laboratory technician. On returning home, he established Redding Dental Lab with the help of his father, which has grown over 50 years into the largest dental lab in Fort Smith and surrounding areas. Upon retirement in 1997, the legacy and ownership of Redding Dental Lab was passed down to his son, Wes Redding.

Don was a member of the Fort Smith Antique Automobile Club for nearly 50 years and took great pride in his 1949 Cadillac Fastback and his 1956 Cadillac Fleetwood. Don and Donna also enjoyed traveling throughout the United States in their “Green Machine”, a 1976 GMC Palmbeach motorhome. They traveled with the Classic GMC Motorhome Club, the Belle Pointe Sam’s Chapter R.V. Club and more recently with their bus buddies through the River Valley Tours.

He was known as a quiet and gentle soul. He was a man of character, integrity and of his word. He loved his family dearly and cherished the time he spent with them, looking forward to their yearly family gatherings and swap meet at Petit Jean State Park.

Don was also a devoted member of Central Christian Church since 1992.

Honorary pallbearers are the employees of Redding Dental Lab along with the members of the Fort Smith Antique Automobile Club and the Belle Pointe Sam’s Charter R.V. Club.

Memorial service will be held 2:00 PM Saturday April 9, 2022 at Central Christian Church in Fort Smith with Tim Beasley officiating. Cremation was under the direction of Ocker-Putman Funeral Home of Fort Smith. The Family will visit with friends following the service.

A heartfelt thank you to Heart of Hospice and Chaplain Jon Hamby for your gentle and loving care. In lieu of flowers, memorial gifts can be donated to the Central Christian Church Campus House 400 N. Waldron Fort Smith, AR 72903.